The Press75 WordPress theme shop has been sold to WestWerk, parent company of WordPress design and development agency WerkPress for an undisclosed amount.

Press 75, established by Jason Schuller in 2008 was one the pioneers of the premium WordPress theme industry along with the likes of StudioPress, WooThemes and iThemes. Jason built Press75 into a popular, well-respected and profitable brand that focused on niche video and multimedia-centric WordPress themes. At its peak Press75 was a $500,000 per year business.

Over the last couple of years however it was clear that Jason had become disillusioned with WordPress and lost passion in Press75 and creating WordPress themes. Press75 hasn’t released any new themes for a couple of years and the existing themes are getting stale and out-dated. As he explains “my passion for WordPress themes and the WordPress theme marketplace has run dry which has resulted in a steady decrease in sales without consistent maintenance and new product(s)… I’ve realized it’s time for me to focus on new avenues and interests. With that in mind, I’ve been searching for a suitable new owner with the assets and passion required to build on a brand I know has so much more to give.” 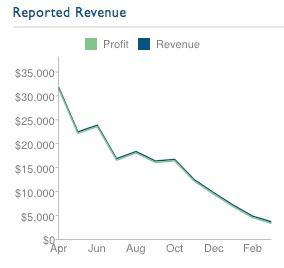 A recent attempt to auction off Press75 on Flippa resulted in bids up to $45,000 but ended without a sale. The supplied financial data for Press75 wasn’t pretty with reported revenue declining consistently and rapidly from $30,000 / month in April 2013 down to $5,000 / month in February 2014.

Unable to find a suitable buyer on Flippa Jason started exploring alternative avenues for selling the site – reaching out to other WordPress companies. As he explains: “finding a new owner for Press75 was much more difficult than I had imagined. I wanted to find someone I knew would be able to provide the kind of product Press75 customers have grown to love”.

In the Westwerk press release on the acquisition of Press75 they state “Jason received several offers from other industry leaders, but ultimately decided to choose Westwerk and its WordPress development division WerkPress”. The amount Press75 was sold for is not disclosed.

So what does Westwork have in store for Press75? Their future plans include: “reinstating a community-based forum, updating older themes, releasing new themes regularly, and creating more responsive theme options. In addition, the agency has several plugins in the pipeline”.

We wish both Jason and Westwork all the best with their new ventures, and we’re looking forward to seeing some new products from Press75.